Thanks to Christina Mills, Acting Director of Ability Tools (the California state Assistive Technology Program) for sharing her experience creating an accessible crib and with what happened when she first posted this article five years ago!

“This posting was originally shared in 2012,” Mills writes AT3 News and Tips, “and it has since received hundreds of hits. In that time we’ve reused our homemade modified crib for our son (the frame and modifications were as good as new, two and half years later, and we found that it was much easier to purchase a toddler bed for our daughter than modify an entire new crib for our son). Five years after becoming parents, my partner and I have noticed an increased online presence of parents with disabilities and assistive technology for parents. It’s exciting to see people with disabilities pursuing their dreams to become parents. Several times a year, new parents from across the country stumble upon this blog post and reach out to me for additional details on how to make their own modified crib. I’ve Skyped, Facetimed, emailed and made individualized videos to assist families in creating a crib that would work for them. There isn’t a one-stop shop for parents with disabilities, but as the community continues to grow, I am sure that more and more AT ideas will continue to expand.”

People with disabilities, especially those of us with genetic disabilities, are not often thought about as sexual beings, let alone parents. Over a year ago, I was given the most exciting news in my life… I was pregnant! As a short stature wheelchair user with a genetic disability, I had thought long and hard about becoming a parent with a disability. My partner also has a genetic disability and finding a physician who would support us in expanding our family was no easy task. It took three long tries with lots of insurance hoops to go through until we finally found an open-minded, honest, forward thinking doctor who was willing to accept me as her patient.

My husband and I played it safe and waited to get pregnant until we had secured a doctor. We were able to develop a relationship with our new Family Practitioner before we became pregnant, which really helped us understand each others’ perspectives on disability and quality of life. We were able to educate our doctor on our own individual disabilities, our positive perspective on potentially having a baby with one or both of our disabilities and connected her with specialists out of the area who she could consult with (if needed) during our pregnancy journey. Our story includes much more, but this blog is about Assistive Technology and I was asked to write about the AT my husband and I use as parents with disabilities. Our daughter is also disabled, which has impacted our AT decision-making.

We spent a significant amount of time researching nursery and transport items that were both safe and lightweight. After much Internet surfing and trips to various baby stores during the third trimester of our pregnancy, we finally began making our necessary purchases and equipment modifications.

Crib frames are made much differently than they were back in the ’70s when I was a kid. Not only are they larger and much more attractive, they are solid. They no longer come with that handy drop-down side gate feature. Even if the drop-down feature still existed, it would not likely work for us because the drop down would not be low enough. We had to come up with an alternative way to get our baby in and out of the crib. My husband doesn’t use a wheelchair, but is also short stature and lifting our daughter over the side gate would become challenging over time.

We found an accessible crib online that included a door, but it wasn’t within our budget. We asked our friends with disabilities what they were using and most people said they had regular store-bought cribs, but that they weren’t wheelchair user-friendly. It was at that point that my husband and I began thinking of ways to modify a store-bought crib to meet our needs. Neither of us is very handy, but thankfully we have family members who are. After much thought and discussion, we developed a modification plan and recruited a handyman to turn our plan into reality.

We purchased a regular 3-in-1 store bought crib which allows us to use it for a longer period of time because it converts into a toddler and full-size bed frame. We specifically went for this model because the base of it included an additional stabilizing frame along the bottom that we could bolt the locking system to. The hardware we purchased included a set of piano hinges, some sliding locks and screws to put it all together.

Fortunately, we had a saw and power drill, which made putting it together much easier. We sawed the front gate of the crib into two equal pieces then attached each piece to the two side gates (head and foot section of the crib) using piano hinges. The critical part of attaching each sawed piece to the side gates was to make sure that it lines up in the middle where it was cut so that there was no gap and our baby can’t get her hands or feet stuck in it. Once the frame was bolted and intact, we added two locks to the front gate which allowed us to open the crib like French doors and access our daughter directly from the crib mattress without lifting her over anything.

It’s a beautiful piece of AT that has worked well for us. Several of our average size non-disabled friends and family members have said how useful the French door gate opening is for them. They’ve said that it doesn’t strain their back and makes it easier to pick our daughter up without the frame of the crib being in the way.

I’ve included a couple of modification pictures. This is what the crib looks like at the end. 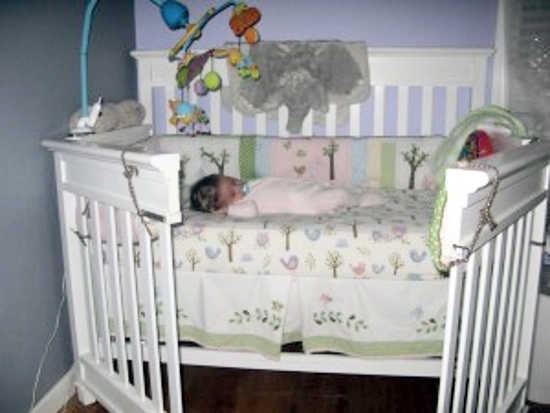