Thanks to JoLynne Lyon for this story from the Utah Assistive Technology Program.

Sometimes just going places isn’t enough. Take going to the grocery store, for example. The whole point is bringing back stuff, often more than can fit on your lap.

That’s where a basket would come in handy. Kenny Lawrence used to have two of them on his scooter, but when he gave it to the Assistive Technology (AT) Lab in Roosevelt and received a refurbished wheelchair, his new-to-him wheels came without a basket. It was just the right job for the lab’s new young volunteer.

The AT Lab in Roosevelt is part of the Utah Assistive Technology Program at the Center for Persons with Disabilities at Utah State University.

Mac Keel is a Union High School student who has volunteered at the Roosevelt AT Lab since the beginning of the school year. When Kenny suggested they add a basket to the back of the wheelchair, Mac brainstormed some ideas, then went to work.

“He got it welded up on his own,” said Cameron Cressall, Roosevelt AT Lab Coordinator. 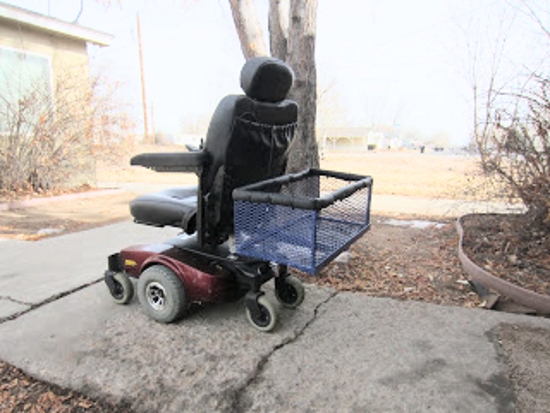 The AT Lab gives Mac a place to use his tool-savvy skills while helping other people. He has enjoyed all the projects he’s worked on so far, he said. “It’s all good. … I just like helping people.”

Amelia Garner, Mac’s teacher, has seen the effect his volunteer work has had on him at school. “Hands-on work is what he wants to do for his job, so this is really great training,” she said. “I think this is building his self-confidence and his self-esteem. And Cameron is so good to work with.”

Cameron, who spent a busy fall and winter at the AT Lab, has been glad for Mac’s help. “He’s been really great. He stays busy and follows instructions.”

Kenny said the finished project should fill the need. “I think it’s going to work pretty good,” he said. “It’s easy to put on.”

Find your State or Territory AT Program