Adriana Mallozzi is helping conceive a new generation of assistive technology (AT): devices that adapt to their users.

Most smartphone users unwittingly rely on technology that was originally created for persons with disabilities. Speech-to-text, word prediction, screen magnification, and the Swype keyboard (newly integrated with Apple’s latest iOS) are examples of “assistive technology” eventually adopted as “universal design.” For this reason, just about everyone has an interest in where AT is heading, not only because each of us will see our bodies and capacities change over time, but because AT is on the cutting edge of where we are going as tech-connected humans. So what’s next for AT?

This week, Adriana Mallozzi’s startup, Puffin Innovations, may help answer that question. Puffin is receiving its first patent for a mouth-operated joystick that’s like no other.

What is Smart AT?

At the nexus of the Internet of Things, Machine Learning and Artificial Intelligence (AI) is what Mallozzi terms “Smart AT.”

These are devices that can improve function and independence for individuals with disabilities, true of all AT; the difference is their intelligence goes further than conventional “smart” gadgets that, for example, turn on the lights, unlock a door, or access the internet.

What defines Smart AT is its capacity to learn from and adjust to the user, collecting and applying data from biosensors and usage patterns for greater efficiency and decision making. Wouldn’t it be great if Alexa could understand you all the time? If your sweaty finger could still be read to unlock your iPhone? What if these devices and functions were critical to your independence and safety and not just a convenience? 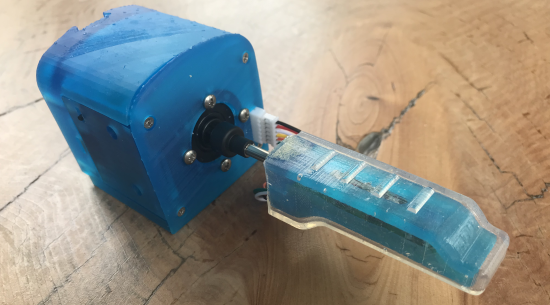 “I’m not the same every day,” observes Mallozzi on how she physically interacts with her invention, the Puffin joystick. “Most AT allows for the adjustment of settings so you can configure the device to the needs of the user. Yet when I need to make a change, I need to get help because the settings aren’t accessible. And there goes my independence.”

Mallozzi has cerebral palsy and drives her power wheelchair using a mouth-controlled joystick.  The Puffin is the device she’s always wanted for computer access. It allows her to navigate the display of any Bluetooth-connected mobile device or computer with a cursor so she can make selections (“click”) quickly and efficiently. “It’s already much more flexible than any other computer access joystick available,” Mallozzi emphasizes. “It’s wireless. It has a very long battery life and it’s modular so I can use it anywhere I mount it, including from my manual chair when I’m traveling.

“But we’re going to take it even further.”

Her current prototype incorporates accessible software that provides her complete control of device settings. She uses it to create different user profiles so she can choose among them based on the kind of day she is having physically.

The plan, however, is to push out updates to the software and firmware that add machine learning and auto configurations based on user data. “Maybe I need my Puffin to ignore certain movements one day,” she explains. “Ideally, I don’t only want access to settings. I want the device to auto adjust to me. Machine learning and AI have big implications for AT.”

Mallozzi is now fundraising to bring the Puffin to market with this Smart AT functionality. Initially, there will be two versions of the Puffin available: one that incorporates sip and puff technology and one that relies, instead, on different sensors, as well as the flexibility to incorporate more inputs.

“We’ve learned not everyone can sip and puff,” she says. “The Puffin has come a long way.”

So has Adriana Mallozzi.

Mallozzi is a member of  “Generation AT.” She grew up in the 80s and 90s in Stamford receiving a range of services, including emerging AT, from Easterseals in Connecticut. She moved to Boston in the mid-90s to attend Boston College and eventually sought out Easterseals Massachusetts. Today she serves on the Easterseals MA Board of Directors.

At age seven, Mallozzi was introduced to computer access. The impact, she says, was profound. “I didn’t even have my first power wheelchair yet. I relied on help for the most basic tasks, which no one wants to have to do. This was finally something I could do on my own.“

The computer brought her games (Oregon Trail!) and the ability to write for herself. She learned Morse Code for use with a Leaf Switch. She worked a keyboard with a head pointer using software with word prediction. By age ten she was coding. “I became addicted to tech,” she says.

At Boston College, in the mid-90s, she moved into the dorms and studied computer science for a year. “Then I burned out and earned my BA in Communications, instead.” Still, she says, she figured someday she’d work in AT.

Her own life experience drove that forward. Mallozzi describes herself as always problem-solving and inventing. Being different in the physical world meant making her environment work for her. Plus her father was a carpenter. She and her sister loved creating with scrap wood, and other found materials, their imaginations unfettered.  She was always dreaming of a better way.

Now, decades beyond her days writing with Morse Code, mobile devices have arrived. “And who can stand to live without their smartphone?” she breezily muses, well aware of the different weight this question carries for many disabled people.  Apps have opened up a world of affordable AT: control of thermostats, door locks, a TV remote, never mind access to communication and music. Mallozzi wants this for herself and for anyone who experiences the limitations she has known too well.

In 2015 she took her Puffin concept to the MIT AT Hackathon. Her team ended up winning the event with a prototype that would propel her project forward. Teaming with a former roommate turned business partner, they wrote and were awarded a Veterans Administration grant the same summer they were accepted to the MassChallenge accelerator program. The outcome was a refined design concept and funds for hiring a mechanical engineer.

Next, the Massachusetts Life Sciences Center funded interns from Worcester Polytechnic Institute and Boston University. Friends with spinal cord injury volunteered as beta testers. In 2019, she won the Not Impossible Limitless Award, connecting her with Avnet, a corporate tech partner that has been instrumental with design assistance. In this way, her project has hurtled forward with validation and resources, powering her determination to bring the Puffin to the public. “And I could not have done it without all these generous collaborators,” she emphasizes.

This week, poised for success with a patent, Mallozzi is still dreaming bigger. Why should a mount for a mobile device stay static? “I may start my day more upright but slide down in my chair later on. Shouldn’t my mount figure that out and keep my Puffin within reach?”

Characteristic of Mallozzi, it’s not all about her. “People with spinal cord injury have trouble regulating body temperature, judging if they are dressed warm enough for their hours outside on a given day. Why not incorporate thermostats and biosensors to help keep people safe and active?”